One of the most recent items to surge in popularity with advocates for eco-friendly bathroom swaps is the menstrual cup. These cups are typically made of silicone and shaped like a cone or a bell and have cult followings because they minimize risk of toxic shock syndrome, can safely be used for more hours at a time, produce less waste, and are often cheaper than other hygiene products over the long term. For decades, the market was dominated by a single brand; however, in recent years there have been a handful of new brands, campaigns, and curious cup-users.

June is a menstrual cup brand that was founded in 2017, among a small handful of cup competitors. What sets them apart from many other menstrual hygiene product brands is their shift away from heavily gendered language for periods, such as “feminine hygiene”, or referring to their customers as women and girls. One of their Instagram posts during the summer of 2020 depicted a model with shorter hair and masculine features, smiling and holding a June cup. The caption of the image reads: “At JUNE, we strive to make sustainable menstrual care accessible and affordable to everyone. We’re excited to be a part of a community of inclusivity that’s always growing”. This was posted nonchalantly and without any fanfare, hashtag, or huge announcement of a related marketing campaign. The social media ad does not specify the gender of the model, and the caption only refers to “inclusivity”. Yet the post still stirred up many more likes and many more comments than is typical of their posts. Why? Because their model, Skylar, is a nonbinary trans man.

The fact is that some people who menstruate are women, some are not, and there are also some women who don’t menstruate at all. Yet having a period is often explicitly tied to womanhood and femininity, a narrative that is often initiated in health class and incessantly perpetuated through media depictions of girls “becoming women” and ads for period products. Menstruation in and of itself can cause significant dysphoria for many trans men and nonbinary folks, even without alienating advertising. For a while the primary menstrual cup on the market was called the Diva Cup- some other brands now have names like Femly, Blossom, Athena Cup, Duchess Cup, and Lily Cup. And of course, the cups come in pink and purple with cursive fonts, and the packaging is stamped with floral patterns. Doesn’t seem to welcoming and inclusive, right? The majority of the imagery and language associated with advertising menstruation products is hyperfeminine and does not present the product in a way that is inclusive of their potential customer base.

What’s interesting about June’s advertisement is that by casually introducing diverse menstruating bodies as the faces of their campaign, they are not only signaling that they are a brand that welcomes all genders, but they are encouraging people to challenge their assumptions about who menstruates and the language that they use to have these conversations. They acknowledge on their webpage that they used to use gendered language to advertise their products but have realized their error and corrected it. Of course, we have to keep in mind that June is a brand, and their number one mission as a company is to sell their product. Even if their goals and values are aligned with authentic diversity and inclusion of the LGBTQ+ community, it is difficult to consider that inclusion in isolation from their marketing strategy. Since June didn’t introduce Skylar as trans in their initial post, comments ranged to enthusiastic support, to angry bigotry, to confusion. Most of the comments were expressing support and excitement for both the model and the brand.

“Messaged yall a while back about more inclusive language and so happy to see youve done the work 🤗💜 appreciate ya!” – @ileak_balance

However, many commenters were expressing disgust or anger at the post. A few were initially confused as to why someone who is not a woman is representing period products but seemed to understand once the brand responded in the comments.

Since they don’t identify the Skylar’s gender, June is assuming that followers will draw their own conclusions from the image. An example of a menstrual cup brand that was not so subtle and took a much different tone was Ruby Cup, which posted an article discussing how they were going to change the language on their website to be more inclusive and started off with the words “Dear Transgender Community, Sorry for being narrow-minded and for discriminating against you”. Was June’s approach to inclusivity more powerful because of its subtlety, or was the bold acknowledgement and education that Ruby demonstrated taking more ownership?

Either way, the reality is that some menstrual health brands are shifting their brand away from ultra-feminine, binary-reinforcing language and imagery that isn’t inclusive of everyone who has a period. It is important to keep in mind that these are brands with marketing goals that are behind these changes, but the hopefully representation and inclusivity demonstrated by brands like June continues. 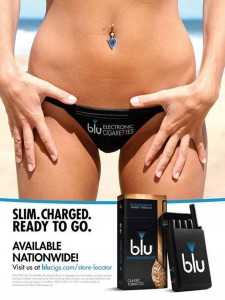 Blu Electronic Cigarettes markets themselves as a healthier, cooler alternative to tobacco cigarettes. To that end, in 2014 the company released a full page advertisement featuring the body of a woman in order to attract primarily young, white consumers. This advertisement is in a format that is suited to magazines, webpages, and billboards. It was found in Sports Illustrated magazine and on Sports Illustrated’s website, which suggests that the advertisement is intended to target men. However, the images and text in this advertisement are strongly in line with historical strategies intended to market cigarettes to women, which suggests that women are also an intended target. Either way, Blu’s advertisement relies on and perpetuates images of sexualized femininity in order to sell their product, and in doing so finds a place in the continuing relationship between women and cigarette marketing.

Instead of burning tobacco, electronic cigarettes heat and vaporize liquids that contain nicotine, which the user then inhales[i]. In this advertisement, Blu ignores promoting the supposed comparative health benefits of electronic cigarettes or their ‘cool’ factor, and instead opts for the lowest common denominator of advertising – sex sells! The advertisement is dominated by the body of a young, thin, white woman at a beach in a bikini bottom labeled ‘Blu Electronic Cigarettes’. She is only shown from just below the rib cage to halfway down her thighs, centered on her groin. An image of the product itself occupies a small space in the lower right corner of the page, opposite the slogan ‘Slim. Charged. Ready to Go.’, directions to the company’s website, and health disclaimers in the smallest of small print.

The focus on the model’s sexual appeal instead of the product being sold reinforces the sexualization of femininity in American culture. The model’s genitalia, figure, and race are all highlighted as elements of her physical attractiveness. The viewer’s gaze is drawn directly to the model’s crotch, where the company’s name is stamped across her bikini bottom. Thus, the Blu Electronic Cigarettes brand is literally attached to the vagina. The image is constructed so that you can’t miss that association. If, by some chance, the viewer missed the model’s groin on the first look, all the lines of focus direct the gaze back to the model’s vagina. The model’s fingers, the insides of her thighs, the packaging of the cigarette recharge kit and the jewelry in the model’s belly button all act as arrows pointing the viewer’s attention straight back to her vagina. The focus on the model’s genitalia sexualizes her femininity. When one recalls the phallic shape of a cigarette itself, the sexual overtones of the image are overwhelming. In this context, the words in the slogan ‘Charged’ and ‘Ready to Go’ take on a sexual connotation, suggesting the primary importance of the female body is its sexual potential. For the purpose of this advertisement, the model’s function is entirely for her sex appeal. A further examination of the model shows that she is thin around the waist, and her impossibly photo-shopped ‘thigh gap’ is prominently displayed. An implicit comparison between the slimness of the model and the slimness of the cigarettes is drawn by word ‘Slim’ in the slogan. According to Blu, sexy women must be thin. Men viewing this advertisement internalize that thin women are sexy women, and women themselves learn that they must slim down for men to find them physically attractive. Thus, this advertisement reinforces the notion that thinness is required for sexual attractiveness in women. Finally, the model is a white woman, which perpetuates the default of whiteness as the sexual ideal in American culture.

This advertisement fits comfortably in the long history of cigarette advertisements aimed at women. In 1928, Edward Bernays orchestrated an Easter Day parade featuring “a number of genteel women” publicly smoking in a New York City on Fifth Avenue. He then ran a series of advertisements for Lucky Strike cigarettes aimed at women, knowing that women were an untapped, potentially lucrative client base. Thus began the co-opting of women smoking as a sign of defiance by cigarette companies and advertising agencies. Early slogans included “You’ve come a long way, baby” from Lucky Strike, referencing the women’s liberation movement of the 1920s[iv]. In the 1930s, A Chesterfield advertisement suggested that, “Women started to vote… just about the time they began to smoke”. Philip Morris followed suit, exclaiming “Believe in Yourself!” above the image of a glamorous smoking woman. These advertisements also capitalized on sexual norms, suggesting that smoking would keep women skinny with the slogan “Reach for a Lucky instead of a Sweet”[v]. Much later, Camel released a brand called Camel No. 9, designed to evoke the glamor and sex appeal of perfumes and pop songs. Of course, all of the women shown in the advertisements were thin white women. The advertising succeeded in changing cultural norms. Women began smoking in larger numbers as they saw smoking as a glamorous, independent act. The effects carry over to this day. Twenty percent of modern women smoke[vi], and in modern culture, smoking can give women an air of power and eloquence, as seen in the television show Mad Men and the feature length movie Breakfast at Tiffany’s. Blu Electronic Cigarette’s advertisement fits in the pattern of previous cigarette ads aimed at women. It markets its product to women with vague allusions to women’s sexual liberation, promises of thinness, and the allure of the white sexual ideal.

The advertisement promoting Blu Electronic Cigarettes perpetuates the social norm of white sexualized femininity. The product is advertised solely by an attractive, thin, white model, or more precisely, the model’s barely concealed vagina. In doing so, Blu finds a comfortable place in the tradition of marketing cigarettes to women by co-opting women’s liberation and promising that their product will make women sexier, skinnier, and cooler.