For my Grant Proposal, I aim to expose Davidson students to the ways in which queer Latino groups, specifically migrants of Latino roots, attribute sexuality as a cause for their migration to the U.S from their native country. The reason I chose this topic is because of my reading of Lawrence La Fountain-Stokes’s Queer Ricans, a work which focuses on assessing the ways in which Puerto Rican migrations in the 1950s was contributed just as much by the issue of sexuality when compared to social, political, and economic issued existent in Puerto Rico. When it comes to migration, people automatically focus on the idea of race and never really think about the role one’s sexuality plays into the matter.

The idea of my proposal involves inviting La Fountain-Stokes to be a guest speaker at Davidson and provide insight on his book Queer Ricans as well as his personal experience of being a gay Puerto Rican and the experiences of gay Latino immigrants he was exposed to during the publications of his work. My plan would not only include a lecture by Lawrence La Fountain-Stokes but would also focus on getting students engaged in the discourse by setting up Sexuality event cosponsored by OLAS, the GSS Department, the Hispanic Studies Department, and the Latino Studies Department. This event would focus on creating atmosphere of an art exhibit with different student groups presenting issues concerning migration, Latino Identity, and sexuality. The room where the presentations are exhibited would be open to anyone who wishes to learn about intersections of sexuality and Latino studies. The event would also require the reservation of the 900 room in Alvarez Union as well as money for materials students can use to create presentations and food. This event would be held hours before La Fountain-Stokes lecture.

To make such event possible a budget would have to be made for the payment of Lawrence La Fountains’s lecture, the reimbursement of materials used by students for the exhibit, the money used for food, and payment to provide La Fountain-Stokes with lunch at a restaurant nearby. In addition, there would have to be approval by OLAS, the GSS Department , the Hispanic Studies Department, and the Latino studies Department.This event would hopefully serve to introduce students to the field of Latino Studies and the ways it intersects with migration and sexuality. 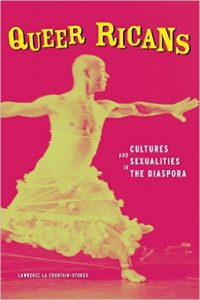