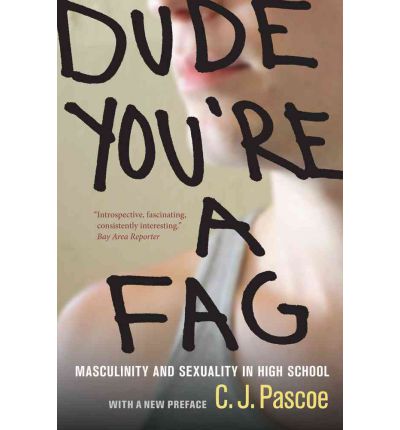 High school, while being a time in a adolescents life where the most growth, physically, emotionally, and psychologically, is looked on by many to be a stressful and miserable period full of bullying, angst, and feelings of inadequacy. Why do so many people hate high school? While it is a tendency of the 21st century to assert that we, as citizens of the United States, have made progress regarding how we accept people of different races, ideologies, and sexual identities, the normal high school environment proves otherwise. The four years adolescents spend in high school form the cornerstone in which they build their beliefs and how they come to interact with the world as adults. C.J. Pascoe’s academic monograph Dude You’re a Fag: Masculinity and Sexuality in High School is a case study of a high school in Northern California. In her work, Pascoe interviews numerous students and faculty and observes the daily workings of the institution for over a year. What she finds is an environment where adolescents ages 14 to 18 are bred to join the heteronormative, patriarchal society that we are all too familiar with.

Pascoe asserts that commonly held notions of gender, masculinity, and sexuality are solidified during the years in high school. During these formative years, Pascoe argues, important social events are central to the development of sexual and gender identity. Formal occasions such as prom, Friday night dances, and homecoming solidify heteronormativity by encouraging teenagers to pair up, girl and boy, and interact romantically in a social setting. Also examined by Pascoe is how the male students interact in ways that are misogynistic and homophobic. She uses the example of the “fag” epithet to show that teenage boys are forced to prove their masculinity and sexual orientation to their peers in order to gain their respect. If a boy is seen as effeminate or weak, they are more likely to be regarded as a “fag”, which is associated with not being “man” enough. One student that Pascoe interviewed said of being called this insult, “To call someone gay or a fag is like the lowest thing you can call someone. Because that’s like saying you’re nothing” (55). This student is pointing to a central idea in Pascoe’s book and a glaring problem of homophobia that is still present today. Being labeled as “gay” when you identity as a straight, cis-gender male delegitimizes the careful presentation of masculinity that many try to portray to the world. Pascoe also discusses how race plays a factor in determining masculinity. She found that black teenagers were automatically placed on a higher level of masculinity as their white counterparts, and because of this they were more likely to be seen as stronger, more aggressive and sexually domineering. The distinction between the types of masculinity led to more black boys being disciplined by the administration and their teachers. The intersectionality between race and masculinity is a vital part of Pascoe’s thesis and is also very relevant to today’s political and social climate, where the demonizing of black bodies is all too common. Pascoe’s monograph leads us to the starting point of the many issues we all face and grapple with in today’s world.

The author and researcher behind this monograph is C.J. Pascoe, a professor of Sociology at the University of Oregon. Pascoe graduated with a degree in sociology from Brandeis University and received her Ph.D. in sociology from the University of California, Berkeley. Her research focuses on the masculinity and femininity, youth, and sexuality studies. Her monograph Dude You’re a Fag won the American Educational Research Association’s 2007 Book of the Year Award. Pascoe’s knowledge expands beyond masculinity and into the realms of anorexia and its prevalence in society today and how social media and technology is changing how teenagers communicate and grow up. The expertise Pascoe brings to this subject is a deep understanding of adolescents and the developmental milestones they hit during high school. The knowledge gathered by the researcher from many years in academia and the practical world qualify her to write such a book.

Pascoe’s monograph is considered a case study of a singular high school that she uses to draw conclusions about educational institutions and their effect on students throughout the United States. Over an eighteen-month period, Pascoe interviewed numerous students, faculty, and administrators while also observing classes and conversations among students. Pascoe also attended common high school events where socializing takes places such as sports games, dances, and school sanctioned assemblies. Both by quoting directly and drawing conclusions based on conversations, Pascoe comes to find that at a working class, diverse high school gender norms and heteronormativity are deeply ingrained into the students. She observes school authorized events, such as the high school’s homecoming assembly before the dance, in which male students dress up and dance scandalously (in ways that would be considered unacceptable for girls to do) and attempt to win votes and be crowned the king. Other occurrences analyzed by Pascoe are the school plays, the only occasion where it is acceptable for boys to dance, wear makeup, and act flamboyantly in public, and the meeting of the Gay Straight Alliance club (GSA), a place where the margins of the school come together for support. What her observations found is not surprising. There are a very small number of students that participated in the GSA and sponsored activities, while many students either acted in or attended the school plays. The thin line between when it is acceptable to embody traditionally feminine characteristics and when it is considered taboo is shown through these events. Pascoe’s discovery of how deeply the notions of masculinity and femininity are pushed, even through our education system, asks if any progress has been made.

The paramount strength of Pascoe’s work is how she takes into account and analyzes the importance of intersectionality when looking at masculinity. By bringing race into conversation, Pascoe solidifies her argument even further. As noted earlier, the black students at River High were almost excluded from the “fag” discourse so commonly heard. Protected by what Pascoe calls “hip-hop culture” it is socially acceptable for the black students to pay attention and care to their appearance and dance in public without fear of being referred to as a fag. Pascoe pinpoints this phenomena as an underlying racist attitude that, because black men are seen as meaner, sexually aggressive, and domineering, they are hypermasculinized. Another succinct intersection is that of masculinity and queer identity in America’s high schools. One student at River High, Ricky, an openly gay student, is discussed about in length as an example of how queer students are treated in high school. Ricky describes his experience as violent and unpredictable at the hands of the male students attempting to assert their masculinity. If Pascoe were to leave out these very important intersections of masculinity, her book would not have had the weight and argument that it has.

The way Pascoe chooses to draw conclusions based on the observed actions of the students can be problematic at times. While Pascoe has and listens to numerous conversations with and among boys about their various sexual conquests with girls, she rarely receives female viewpoints. She instead analyzes the interactions of the students, which sometimes border on sexual harassment, and reports on them. In many of these scenarios, Pascoe reports that the girls are most often willingly submissive to the physical dominance of the males without giving a reason why from the girls’ perspectives. The lack of primary information the readers get calls into question Pascoe’s diligence in her research.

This particular monograph examines a subject that is relatable to anyone who graduated from an American high school. Though this may not have been the experience for everyone, River High is a portrait of the American, public, educational institution that casts its influence over the rest of society. Its explicit and easy to read format makes it accessible to readers that are not academics, while its well-researched and deep arguments make it attractive to those who are. I think that this book is analyzed deeply and has an argumentative and interesting take on an experience that is so common to so many people, even today.