Kellogg’s, a multibillion dollar company and American icon, produced two images one year apart for distinct advertising purposes. The first featuring Tony the Tiger was originally published in the 2014 Atlanta Pride Guide, whereas the second was posted on the official Kellogg’s Twitter account the day that the Supreme Court of the United States legalized same-sex marriage. The two images have distinctly different audiences and purposes, reflecting a break in time and culture surrounding the legalization of same-sex marriage and their corporate motives.

Tony the Tiger accompanied by the rainbow “PRIDE” are both iconic and eye-catching, which draw the reader into a more involved advertisement for the reader. The choice of publication for this image in the Atlanta Pride Guide makes it clear who the intended audience is: people attending the Atlanta Pride celebration. To break this down further, it can be reasonably assumed that the majority of the audience is members of the LGBTQ community, with members of the allied community supplementing the target population. The primary caption encouraging readers to “Wear your stripes with pride” refers to the fact that the “gay pride flag” is a series of rainbow stripes, which obviously appeals to the LGBTQ community who use the rainbow flag as a banner, particularly at pride events. Therefore, the use of the word “pride” plays right into the event at hand, but the association of Tony the Tiger relies on years of prior advertising to appeal to emotions of the viewer. Tony, the mascot for Kellogg’s Frosted Flakes, is know for being a strong, encouraging character with the slogan “They’re Great!” This slogan could easily refer to the “stripes” that are being worn with pride. Even without being explicitly noted, the point of Tony is to bring that slogan to mind. In addition, Tony himself is covered in stripes since he is a Tiger, so the idea of “wear[ing] your stripes with pride” also encourages the reader to embrace who they naturally are.

Once Tony has the attention of the reader, there are a series of more nuanced aspects of the ad to be considered. The logos at the bottom include a multicolored “pride & allies” tag that features the traditional Kellogg’s “K,” the full “Kellogg’s” name, and an endorsement from the Human Rights Campaign. The “pride & allies” tag serves as a self-proclamation of the fact that the company is composed of both allies members of the LGBTQ community. An endorsement from the HRC justifies that proclamation by providing a third-party perspective. The HRC as the largest LGBTQ rights organization in the country has a lot of influence and is a well known symbol on its own. So, to have a huge organization mark Kellogg’s as a top place to work for LGBTQ equality is a noteworthy accomplishment. It also works in conjunction with the rest of the text in the ad which discusses the company’s culture with regard to gender and sexuality acceptance for its employees. The explicit message from Kellogg’s in this ad is not “buy our product” but instead “work for us” which is an interesting tactic to take from a corporation. However, it is significant because of the turmoil regarding workplace discrimination protections for the LGBTQ community. In many places there still are not universal non-discrimination clauses, so for a company to outwardly advertise that it does not discriminate is pretty significant. The sense of security and acceptance appeals to the audience, and even if readers do not choose to work for Kellogg’s, they may still choose to buy their products because of that acceptance. 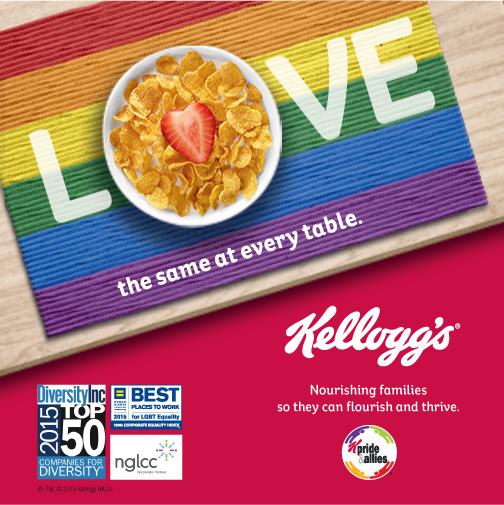 One year later, the second image was posted on the Kellogg’s Twitter account the day that same-sex marriage was legalized. Some features are the same as the Pride Guide ad, such as the HRC endorsement and “pride & allies” tag. However, there are also some notable distinctions. The only explicit reference to the LGBT community is in the HRC endorsement for Kellogg’s as a top place to work. The other tags from DiversityInc and the NGLCC are not obviously referencing support of the LGBT community, unless the reader is familiar with the National Gay & Lesbian Chamber of Commerce. Anyone unfamiliar would likely not recognize the acronym and may not understand the endorsement. Similarly, the rest of the text and symbolism of the image may not be obviously pro-LGBT to someone who was not familiar with the rainbow flag. The flag is used as a subtle placemat for a bowl of cereal, which could be easily overlooked while reading the caption “LOVE: the same at every table” for which the bowl of cornflakes serves as the “O.” The smaller caption under the company name reads, “Nourishing families so they can flourish and thrive.” Both of these captions are generic enough that they could reference any given family without specifically referring to the legalization of same-sex marriage.

By posting this image on the official Kellogg’s Twitter, the company obviously is reaching out to a different audience than that of the Pride Guide. Instead of a primarily LGBT and ally audience at a specific pride event, the image could be seen by anyone who follows the Kellogg’s account, as well as by the followers of anyone who shared the image. Presumably this larger audience is exactly the reason for less explicit support of the LGBT community. The use of the rainbow flag makes its support clear to the community and to its allies, but it is subtle enough to potentially go unnoticed by opponents of LGBT rights. This ad is a way for Kellogg’s to make its stance known without offending and potentially losing the sales of less accepting Americans. It is interesting that the company appears to strategically walk a line by gaining LGBT and allied customers while not losing their opponents. The approach of referring generally to “love” and “families” plays into the idea that Riki Wilchins presented that for the LGBT cause to be successful, there has been a focus on portraying LGBT people to be the same as straight people, just with different sexual interests. This image implies that “love” is same no matter what and that any version of that love can constitute a family that Kellogg’s can nourish. This focus on sameness has evidently been successful since at the time of publication of this image, marriage equality had been achieved.

The difference in audience and message between these two images before and after the landmark legalization of marriage equality indicates a difference in the degree of publicity that Kellogg’s is willing to accept in supporting the LGBT community. Advertising in a printed Pride Guide assures that the first ad will reach a more specific audience, and because of that, Kellogg’s can explicitly try and recruit LGBT employees and customers. While this ad could have been put on social media, to do so more than a year before the Supreme Court ruling would have been very progressive, and the company likely would have faced more backlash. However, distributing a more generic love-based ad on social media after the ruling serves to publicly support the newly granted rights as opposed to advocating for a controversial cause as it would have been before the ruling. This timing implies that even though Kellogg’s was willing to announce a pro-LGBT stance to a small audience, they stayed out of the broader public eye before the ruling so as not to be seen as too progressive and lose opposing customers. These two images are good examples of how corporations get involved in social and political issues while still maintaining a capitalist agenda.