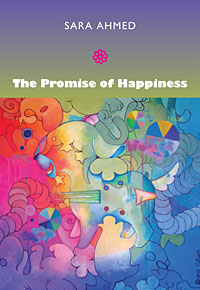 The cover of Sara Ahmed’s The Promise of Happiness seems designed to evoke the emotion of happiness. Titled Happiness Isn’t Happiness without a Violin Playing Goat, everything in the artwork, from the design, to the colors, to the title, exudes light-hearted whimsy. It seems to be a cover that conceals happy contents, but it encloses a book that critiques the emotion the artwork attempts to portray: happiness (Collura). While the idea that happiness is good and that unhappiness is bad is generally accepted as a common worldview, Ahmed challenges this viewpoint by examining how we act and react to the promise of happiness. She primarily does this by observing how groups such as feminists, queers, and migrants are exposed to different expectations for happiness and to different experiences of the emotion. Although she does not explore a topic as lighthearted as the cover suggests, Ahmed’s exploration of the concept of happiness effectively brings the problematic associations of the emotion to light.

The author of the book, Sara Ahmed, is a professor of race and cultural studies at Goldsmiths College, University of London, and she serves as an important voice in the fields of feminism, queer theory, race, and affect theory. When discussing migrants in The Promise of Happiness, she states that she was born to a Pakistani father and English mother, and she comments on the fact that her experiences being in the second-generation of a mixed race family has given her insight into how migrants view happiness (Ahmed 248). She has written several other books that deal with similar topics to the ones discussed in this monograph, such as Queer Phenomenology: Orientations, Objects, Others and Differences that Matter: Feminist Theory and Postmodernism. The Promise of Happiness has not been her first book to deal with affect theory; she also wrote The Cultural Politics of Emotion, demonstrating that on top of focusing on her obvious specialty of cultural studies, she also looks into the culture of emotions. The fact that she is an expert in many different fields of study allows her to provide insight on a topic as broad as the impact of happiness.

The objective of Ahmed’s work in this book is to examine how different groups of people are promised happiness and how this promise affects these people. She focuses primarily on affect aliens, “those who are alienated by virtue of how they are affected by the world or how they affect others in the world” (164). These are the people who do not receive the same promise of happiness as the privileged and those in the majority, and the affect aliens she focuses on are the feminist killjoy, the unhappy queer, the melancholic migrant, and the hopeless revolutionary. In the book, Ahmed gives stories as to why these groups of people are not met with happiness by the people around them and why this absence of happiness results in them being recognized as unhappy people. By analyzing these judgments of unhappiness and the lack of possibility for a traditionally happy future for affect aliens, Ahmed argues that unhappiness is not necessarily a bad thing and that happiness is not necessarily a good thing. Her book serves as an argument that “we need to think about unhappiness as more than a feeling that should be overcome” (217). She explores the idea that simply because these affect aliens do not experience traditional representations of happiness and face more challenges than those in the majority does not mean that they are worse off than those who fit the mold as being “happy.” Although unexpected, this argument caused me to recognize the problematic tendencies with the construct of happiness.

Ahmed’s method of research involves her following the word happiness as it appears in mediums such as movies, novels, and scholarly works as a way to uncover information about how the promise of happiness affects different groups of people. “[She tracks] the word happiness, asking what histories are evoked by the mobility of this word” as a way to view what the usage of this word implies and study the effect that it has (14). She uses this method in order to uncover how happiness promises hope. She defines this “the promise of happiness [as] what makes certain objects proximate, affecting how the world gathers around us,” and by tracking the word, she is able to view how this promise of happiness affects different people (14). Her main sources are “unhappy archives,” which are primarily books and films that are “assembled around the struggle against happiness” (18). She discusses books such as George Eliot’s The Mill on the Floss to discuss finding happiness as a feminist and Annie on My Mind to discuss the the power parents have in determining happiness for queers. She also looks into movies such as The Hours, If These Walls Could Talk 2, Bend it Like Beckham, and Children of Men, which all look at happiness from the perspective of affect aliens. She also states that her archive for the book draws from more than simply just books and films, and that “[her] archive is also [her] world, [her] life-world, [her] past as well as present, where the word happiness has echoed so powerfully” (19). Encounters with happiness occur in all mediums, so Ahmed follows the emotion wherever it takes her.

On top of an examination of popular constructions, Ahmed also looks into the analysis of happiness from scholarly perspectives. Ahmed combines her expertise on her specialties of affect theory, gender theory, and feminist theory with philosophy and positive psychology in her research. This includes a focus on works done on happiness by philosophers such as Nietzche, Aristotle, Rosseau, and Kant, on top of looking at works by psychologists such as Alan Carr and Michael Argyle. Her incorporation of these authors demonstrates how her work combines aspects of multiple different fields of studies. Her analysis allows her to expand on and also to negate the popular ideas on happiness made by other scholars. This commentary along with her personal research allows her to insert herself into the scholarly conversation on happiness. By combining works of specialists in these fields with her own findings on the cultural productions from her “unhappy archives,” Ahmed creates a portfolio of sources that examine the effects of the promise of happiness.

Out of all of the sources that Ahmed uses from her unhappy archives, cultural productions are what the majority of her arguments are based off of. She uses both books and movies that center around characters who identify as affect aliens, and she uses the stories of these characters as her sources about how happiness affects individuals. However, by focusing on the happiness of characters instead of real people, her arguments on the happiness of actual feminists, queers, migrants and others seems inauthentic. Books and movies are created in order to be dramatic, so the stories of characters in them do not necessarily depict real-life experiences. Therefore, I have trouble with the fact that Ahmed uses these sources as examples of the struggles that affect aliens go through. Some of the stories that she follows may depict real-life situations, but as a whole, the plotlines that she examines are fictional. Because of this, I left the book wishing that she had examined the stories of real people as in-depth as she examines cultural productions. The anecdotes from other people that she mentioned were some of the most impactful parts of her book. For example, Ahmed uses a story from Audre Lorde about being spit on by white men as a young, black child to consider the unhappiness surrounding racism (82-83). After I finished the book, I did not remember the details about every cultural production that Ahmed examined, but this account of racism made a lasting impact. Therefore, I wish that Ahmed had used more stories like this one.

Despite some problems, as a whole, I believe that the majority of Ahmed’s arguments rang true, and I left the book questioning if happiness was in fact a positive construct. I especially identified with her analysis on the ways most people, myself included, feel inclined to appear happy for those around us. She argues that “we have a responsibility for our own happiness insofar as promoting our own happiness is what enables us to increase other people’s happiness” (9). We feel obligated to always project ourselves as happy people because by appearing unhappy, we are preventing happiness from spreading. Feminists are often labelled as “killjoys” because they refuse to participate in this cycle of false happiness. Shulamith Firestone led a feminist movement to encourage women to only project signs of happiness when they felt truly happy, demonstrating that “feminism involves challenging the very ‘pressure’ of happiness, the way it restricts the possibilities for finding excitement, of being excited” (69). This desire to limit portrayals of happiness that only are for show has resulted in feminists often becoming labelled as killjoys because they reject the pressure of presenting themselves as “people pleasers.” I had never paid much attention to the pressure placed on me or the people around me to never appear unhappy, but this book prompted me to notice it. I found this theme explored by Ahmed to be her most effective argument in terms of explaining the role of happiness in my day-to-day life, and her discussion on this subject has been my biggest takeaway from the book. She allowed me to further understand the negative perceptions surrounding feminism, and as a feminist, her argument caused me to start to make more of an effort to let go of my desire to people please.

The Promise of Happiness offers a perspective on happiness that goes against the norm. Calling happiness bad seems to be an oxymoron, and the same goes for calling unhappiness good. However, Ahmed argues that these associations should be made more often. She convinced me to stop automatically assuming that happiness is always positive. On top of agreeing with what Ahmed said, I enjoyed reading her arguments. Her book was well-written, easy to follow, and I would definitely recommend it. Although she primarily studies the effects of happiness on affect aliens, her study on happiness can be applied to how all groups of people react to the emotion and judge the happiness of those around them.