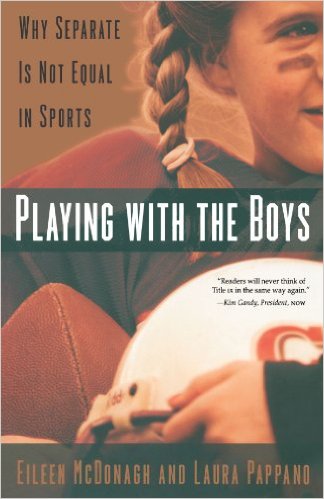 Eileen McDonagh and Laura Pappano’s Playing with the Boys: Why Separate Is Not Equal in Sports provides a lot of evidence and context to arguments about the division between men’s and women’s athletics, proving that women are unjustly segregated from men in the athletic arena. In writing this book, the authors meant to provide context and examples that support “how athletics shape and perpetuate stereotypical gender roles that limit women’s social, economic, and political opportunities, thereby maintaining women’s inequality in American society compared to men” (4).  Through coercive sex segregation, our society has created and continues to blindly follow, ideas and rules that lead us to the end result of women not being allowed to compete with men athletically. Even as the women’s rights movement has come a long way in society in general, there’s still a lot more work to be done. One of those places where equality is obviously not present is in athletics.

McDonagh and Pappano introduce the idea of “the three Is” (7) which are the basic tenets of coercive sex segregation: inferiority, injury, and immorality. One of the reasons why separating sports by gender is still considered acceptable to people is because of the basic, widely accepted concept that women are naturally worse at sports than men—bottom line. It is assumed, that based on gender alone, the women would not be able to compete at a high enough level to play with the boys. In addition, many people fear for women’s safety when presented with the idea of integrating sports across gender lines. Due to the fact that women are, on average, a lot physically smaller than men, there is the feeling that a woman competing against a man is at a much greater risk of sustaining a serious injury. The final fallacy is the objective immorality of boys playing with girls, which is easily the most inexplicable of these three Is, and the one that I have yet to actually encounter in my life, but something that McDonagh and Pappano found to be present in the minds of others.

Another thing that the authors found notable was the way that society feels the need to force segregation in sports, even when it’s unnecessary. There’s no reason why men’s tennis players have to play two more sets than women’s tennis players: either shorten the men’s game to make it less drawn out and possibly drive up interest in the sport because it requires less time to keep up with, or trust that the highly trained athletes, despite being women, are actually capable of playing two more sets if need be. Even the slightest of rule differences, such as something that didn’t appear in this book because it’s a recent change—women’s college basketball changing wtih two twenty-minute halves like the men play, to four ten-minute quarters instead, giving them some extra rest during the games—implicitly enforce the idea that women are weaker, and therefore can’t handle the marginally extra wear and tear that the lack of a media timeout halfway through each half would cause.

An interesting part of this book, is that from the very beginning, it recognizes the importance of intersectionality. Even though it wasn’t for a few pages that the concept of intersectionality was truly addressed, the book’s preface begins with an anecdote that is overflowing with intersectionality: Don Imus referring to the members of a mostly black Rutgers women’s basketball team as “‘nappy-headed ho’s.’” (ix). Not only does Imus attempt to attack these women based on their gender, by using the term “ho,” which is meant to be a derogatory term referring to their sexuality, but he also includes a racialized comment, as black women are constantly being put down for their natural hair seeming unkempt, unprofessional, and unattractive. However, while McDonagh and Pappano make it clear that intersectionality is important in general, they would not be focusing too much on it in their writing because  “assumptions about women’s inferiority to men in athletic endeavors cuts across all other ascriptive characteristics” (5), which is their way of saying that sexism is equal opportunity in the sports world. They don’t dismiss the importance of the combination of gender and other identities (in this case, race), but they make it clear that the way they see it, the views of women’s athleticism is the same no matter whatever else the woman may be. They defend this by saying that assumptions made by Imus, or anyone else, about female athleticism began with gender difference as the starting point, rather than another identity. Therefore, the authors stated: “our aim is to begin the conversation about intersectionality in sports by addressing the foundation of that intersectionality: sexism in sports in general and coercive sex segregation as an underrecognized form of sexism in particular” (6). They consider gender to be the key factor in negative remarks regarding a woman’s athletic prowess.

For the most part, this book relies on past research to further examine the ideas proposed early on. From looking to biology to address whether or not men have a physical advantage over women, or at the court cases that established precedents for women attempting to break into male dominated games, to contemporary, related quotes in the media that had some significance, the book did a really good job at coherently synthesizing a lot of types of research to create a book that flowed well logically. McDonagh and Pappano did not conduct their own surveys and present their results, but rather they gave an overview of the topic’s history and present.

The biggest problem with the way this book is written, is that it almost entirely ignores gender queer identities when talking about the sex segregation in sports. Outside of a few pages in the second chapter, this issue isn’t mentioned in the book. In fact, the term sex segregation itself is quite flawed. What McDonagh and Pappano really mean is gender segregation. As per the accepted definitions of the words sex and gender, sex refers to how a person is classified based on their genitalia at birth, whereas gender is a social construct that can be decided by a person at any point during their life. Instead of differentiating between the two, the authors assumed the gender binary to be true, and therefore basically ignored the distinction between the terms “sex” and “gender,”  even in the brief moment that transsexual athletes were acknowledged. That is why throughout this review, even when referring to a moment where the book mentions sex, the word gender has taken its place, because that would be the correct term in that situation. They did talk about Anne Fastou-Sterling’s important work about the ambiguity of sex, which is too essential to ignore completely, but they didn’t really dig much deeper.

Being that this book was written in 2008, I am not able to give McDonagh and Pappano a pass on the basis on the book coming before the concept of a non-binary gender expression came about. By the time that this book was written, the idea of a genderqueer person was—while obviously not in the national spotlight nearly as much as it is in 2016 now that social media has really taken root in our culture—not unheard of, especially for some in the realm of academia, as McDonagh and Pappano are.

They probably avoided diving too deeply into the topic because the inclusion of non-binary genders, especially transgendered people, would have complicated the book so much more. There are already a lot of laws that govern the difference between men’s and women’s sports, which suggests that an entirely new set of laws would have to be put in place to account for athletes who choose not to identify with one of those two categories. Otherwise, many questions could be raised; are athletes placed into groups based on their genitalia at birth (and therefore, assigned sex), or by what they more closely identify with currently? Also, would it be fair to ask someone who refuses to be referred to as either a man or a woman, to choose one of the two? For something that couple have been its own book of research, the four pages that were devoted to non-binary gender expressions were not enough. Even after mentioning the importance of intersectionality early on in the book, McDonagh and Pappano deprive themselves of an opportunity to examine the clear intersectionality between gender identity and sex difference.