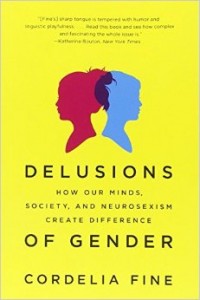 It’s no secret that men and women are different; whether it is the way they dress, the way they act or the appearance of their genitalia, but is there also a difference in the hardwiring of the male and female brain? Cordelia Fine’s book Delusions of Gender sets out to address this issue, and uncover if it is really hardwired into our brains that women are designed to better understand emotions and preform housework, while men are designed to be devoid of emotions and better suited to succeed in the professional world, especially of the math and science field. As a female college student I was especially drawn to Fine’s book. Are all my past and prospective academic achievements a waste of time? Where my parents wrong in telling I could do anything I set my mind to? Would my time have been better spent these past four years trying to find a husband and touching up my domestic skills rather than at Davidson?

The sentiments I’ve expressed above are just a few of the many gender stereotypes that Fine addresses in Delusions of Gender. The general consensus for many people these days is that men and women are equal. In western society women have equal access to political rights, educational rights and social rights, or so it would appear. Fine notes that many people, assuming this is the case, begin to question with all this equality between the genders why are women not succeeding in the same fields at the same rates as men, is the reason biological rather than social? To address this over arching question Fine has reviewed numerous scientific studies that make claims to have found biological differences within the brains of men and women. Fine however claims that its not biology but rather the environments we grow up in. “When the environment makes gender salient, there is a ripple effect on the mind. We start to think of ourselves in terms of our gender, and stereotypes and social expectations become more prominent in the mind. This can change self-perception, alter interests, debilitate or enhance ability, and trigger unintentional discrimination. In other words, the social context influences who you are, how you think and what you do.” (5) Through her systematic review of numerous studies Fine reveals flaws in the methods and conclusions of each study. Instead she claims that gender stereotypes are so prevalent in modern society that it is nearly impossible to conduct accurate studies to determine the truth about whether or not gender differences are innate.

Cordelia Fine is a Canadian-born British academic psychologist. She first received her BA from Oxford in experimental psychology, followed by a M. Phil from Cambridge University and a Ph.D. in Psychology from the University College London. She has conducted psychological research at Monash University in Australia, the Australian National University and Macquire University also in Australia. Fine is currently an ARC future fellow in psychological sciences and associate professor at the Melbourne Business School, University of Melbourne. Delusions of Gender is Fine’s second book, which was proceeded by A Mind of It’s Own a study of how the brain distorts and deceives. She has also written countless works that have been published in academic journals, and as chapters to scholarly books.

Delusions of Gender is broken up into three parts, the first being titled “Half Changed World’ Half Changed Mind.” In this section Fine lays out the larger arguments of her book that social and environmental factors strongly influence the mind, challenging the “biology as fallback” view. Fine first introduces notions of associative and explicit knowledge. She discusses how through influences such as the media and gender stereotypes patterns in our environments lead us to unconsciously draw conclusions that women are emotionally driven, while men are driven by rationally based decisions. She states, “close or powerful others in your life may be especially likely to act as a mirror in which you perceive your own qualities.” (10) Fine also discusses stereotype threat, the fear of certain groups fulfilling the stereotypes attributed to them, in terms of women in the work place. The pressures of stereotype threat have been shown to cause anxiety, depletion of memory, lowered expectations in oneself and general frustration. Fine attributes stereotype threat and lack of fit bias, to the lower levels of female professionals in male dominated fields rather than hardwiring of the brain.

In the second part of her book, “Neurosexism”, Fine criticizes the current available arguments and studies conducted supporting notions of sex differences in the brain. She focuses on methodical weakness, generalizations and assumptions made by the researchers in their reports of the data. One of the first theories Fine contests is Louann Brizendine’s. Brizendine claims that due to a surge of testosterone experienced in utero, for male fetuses, the left side of the male brain is affected leading to death of cells in the centers of the brain that govern communication, and instead grow cells in the area of the brain that controls sex and aggression. Brizendine states that this suppression of the left hemisphere of the brain predisposes men to preform better than women in math’s and arts. Fine quickly undermines this theory by pointing out that there has not yet been developed an accurate way to test neonatal levels of testosterone and that there is no clear evidence that this testosterone surge affects the brain at all. Fine continues to proceed in this manner debunking scientific theories that have been based on studies with methodical errors or that have been grossly overvalued, such as conclusions about the human brain that have been based on studies of primate brains. She also introduces the “file cabinet phenomenon” in which studies that are not regarding as ground breaking or not deemed interesting enough to the public are not published but rather filed away, never to bee seen again. Fine claims that this has been the fate of many scientific studies that have actually proven similarities in the brains of males and females. Finally, in this section she examines the emphasis that has been placed on PET and MRI scans. The popular belief is that such procedures are the be all end all of scientific knowledge, when in actually this technology is still in its infancy and thus is not reliant enough to base entire scientific studies on.

The final part of Delusions of Gender , “Recycling Gender”, discusses the highly gendered society in which children develop. Despite attempts of parents to “parent gender neutrally” it is nearly impossible to do so in todays society due to common conventions such as media and pre school socialization. Children have been shown to be able to acknowledge gender differences as early as one year old, and are some of the strictest gender polices. For instance Fine notes numerous studies where it is actually the peers of individual students who criticize cross gender interactions.

With all this knowledge Fine is arguing that as a society we have not yet conducted thorough enough tests to determine whether or not there truly are gendered differences within the brain. Instead the ways we are socialized regarding gender from extremely young ages transforms the malleable mind to reflect gender differences.

Through her witty language and meticulous research Fine addresses the complex question of inherent gender differences with ease. Her biting criticism of sloppily conducted studies and humorous asides make the book accessible to those without backgrounds in science or gender studies. Fine does a great job of canvasing a plethora of studies and detailing why each one should be discredited. This is evidenced through her summery of each scientific study she has researched, the reasons she gives for debunking the study and through the 81 pages of footnotes that follow the main content of her book.

Due to Fine’s mass debunking of current scientific research conducted in the area of gender differences Delusions of Gender received a large backlash from the scientific community. At times it feels as if Fine has oversimplified the issues faced in the scientific studies and does not give credit to individual aspects of each study. She belittles any information gleamed from scientific research that she does not agree with. Furthermore, when discussing gender stereotypes prevalent in children’s television shows, movies and books she makes vast generalizations stating that girls are always seen preforming stereotypically feminine roles. While this may have been true during the time Fine was writing, only 5 years ago, I feel that there has recently been a turn to diversify the messages we are sending to children through media. Finally, with the exception of one mention in part two about the work place experiences of transsexual women, Fine does not address individuals that identify as anything other than male/female or man/women. She does not allow room for discussion regarding transsexuals, pansexuals or issues of intersectionality. She also does not dedicate anytime towards considering how sexuality may affect the binary of male vs female brain.

Accepting the belief that there is something inherent within men and women that are the source of the gender binary would be the easy way out. It is much more difficult to accept that the reason for the continual inequality between men in women is societal and that to improve these inequalities we will have to completely alter societal norms. Fine presented a clear and convincing argument of exactly this issue in Delusions of Gender. The book is thought provoking as it encouraged me to question my own personal beliefs regarding the gender differences between men and women, and how such beliefs have been presented and reflected in my actions from a young age. The book also provided me with better insight of the challenges I might face as I continue on in my life as a women with high academic and professional ambitions, and as a women who hopes to one day raise children in a gender neutral setting not defined by pink and blue. One of Fines final quotations “gender difference is the product of gender inequality, and not the other way around” really resonated with me, and something that I will continue to strive to undermine.