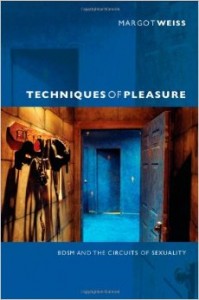 Weiss locates her book and her argument firmly within the various class, racial, and gender conversations about BDSM. In accordance with her intersectional approach, she references gender theorists such as Judith Butler and Michael Foucault and other feminist theorists, as well as various economists, historians, journalists, race theorists, and activists. Each claim Weiss makes is carefully explained in reference to the work of previous scholars, making sure to clearly outline which ideas she finds useful for her own analysis and which concepts she intentionally disagrees with or discards. However, the quotations from other scholars were almost always outshone by the accounts of practitioners in the scene. The interviews were always more interesting and more enlightening, and it is curious that Weiss chose not to lean more heavily on the visceral accounts and surprisingly cogent arguments made by people in the scene, rather than academic arguments made by scholars who may or may not actually have experience in what they are discussing.