In her discussion on women, Capetillo highlights the gendered pressures that women face. In today’s media many of these gendered roles are fought against, accepted, and joked about. Parks and Recreation, an NBC comedy series, features main character Leslie Knope, who consistently reiterates her feminist stand and fights for what she believes in. In the episode of discussion today, Leslie’s husband, Ben, is running for Representative of Indiana, and Leslie’s position of wife to the candidate brings with it gendered expectations and antifeminist pressures that Leslie has fought to denounce for years.  The episode is entitled “Pie-Mary” because Leslie, along with all the other wives of candidates, is supposed to take part in a pie baking contest.  This assumes not only that all the wives care to or can bake, but that all the candidates are heterosexual males. Specifically in the scenes featuring Ben and Leslie, Capetillo’s back and forth, somewhat sarcastic, arguments of what a woman is expected to be are reflected.

In this episode of Parks and Recreation, Leslie Knope is criticized of shirking her motherly roles by working and being independent, mirroring Capetillo’s argument for the working woman. According to the progressive views of 1910 by Capetillo, “the European woman aspires to public office, to government, to administering towns, without losing her feminine personality, nor her motherly and wifely duties;” however, in the 2015 episode of Parks and Recreation, Leslie is criticized for being a bad mother because of her independence and career and pressured into joining in gendered customs that she does not agree with, showing that maybe not all that much has changed in a century (Capetillo 19). Parks and Recreation hilariously plays off the idea reflected in Capetillo’s work “that women in the public sphere and workplace would lose ground, jeopardizing their home, their family and their children” (19). In the episode Leslie is repeatedly interrogated about her family and whether she actually loves her children simply because she is an independent woman with a career. Leslie is accused of hating her family and thinking that women who love their families are stupid solely because she will not engage in the pie baking activity.

Capetillo draws upon this idea that society expects an unreasonable balance of ideals for the perfect woman, which is reflected in the differing views of various group leaders on Parks and Recreation. Capetillo delivers an exhausting list of what is expected of a woman, wife, and mother (9). By the end of the first few pages, we as readers are mentally and physically drained at thinking about what women had, and still have, to maintain in society.  Women are supposed to consist of multiple different personality traits that are in opposition and are acceptable only at certain times or in certain places or in certain company. And on top of that, the woman must not acknowledge these traits within her so as to seem humble and modest. It seems that everyone except the woman is meant to be happy and benefit from her existence. In Parks and Recreation we get to visibly experience this tug from all ends that Leslie experiences. No matter what she seems to choose, nobody in her society can be content. Every outcome or opinion sparks controversy and more often than not, all parties involved are unhappy. During one part of the show, many different activist and anti-activist groups are on a talk show, and every group has something different to complain about. Either Leslie is being too progressive, or not progressive enough, or simply being a woman with a voice, God help us. Just like with Capetillo’s description of the ideal woman, Leslie is trying to make everyone happy, failing, and in the end she is not happy with herself until she decides to finally speak what she believes in and argues for everyone to simply be their own person.

This episode of Parks and Recreation mainly highlights feminism via issues relating to Leslie Knope, but also interestingly looks at Leslie’s marriage to Ben and how he supports her, which ties directly into Capetillo’s argument for happiness in marriage. Capetillo argues that “true happiness” cannot exist in a relationship where a man has freedom and fulfillment and is uncaring whether his wife is pleased or agrees with his conduct (10). In Parks and Recreation, Ben and Leslie seem to have a happy marriage fostered by commitment and sacrifice on both ends for one another. Their willingness to sacrifice their own successes and feelings for one another allow them to be happy together and to release any resentment they would have had towards one another. In this example of a heterosexual marriage, Parks and Recreation is not satirizing social arguments, but is showing how a relationship can and should work, what the youth of today would call “relationship goals.”

Parks and Recreation makes the episode’s feminist argument so blatant and gendered that the audience has no option but to think the claims are utterly absurd. However, the statements in the episode are close to comments made in society, showing viewers that the show is not that different than how absurd our reality has become. The episode features a male activist group called “The Male Men,” which fights against the recent oppression men have perceivably faced at the hand of women fighting back against patriarchal norms. This part of the episode is supposed to incite laughter, but it also points at the reality that men are fighting back against feminism. There are some men like Ben, that are not fearful of women gaining power, but there are many men who are working to quiet women. The Male Men protest that Leslie is forcing Ben to participate in the “Pie-Mary”, which he actually chose to do himself. She argues that Ben loves to bake and has personalized aprons.  The Male Men spokesperson blames her for interpreting his dress as “asking for it.”  This comment is also absurd and hilarious, but such a common statement in our society, that the show is hinting to the audience that the scripted comedy and our reality might not be too different when we take a closer look.

Parks and Recreation reinforces that feminism is not about men versus women. Feminism is about equality, and Ben’s support of Leslie and his own feminist views reiterate to the audience that feminism is a fight we can all take part in. When she came to class last week, Anne Balay mentioned the importance of listening to one another. She said we need to accept that people have different views and that the key to living humanely and to understanding is simply to listen. Parks and Recreation shows that failing to listen gets people nowhere; no one is happy and no one “wins.”

**Didn’t know how you wanted us to cite based on the information given on the pdf given. 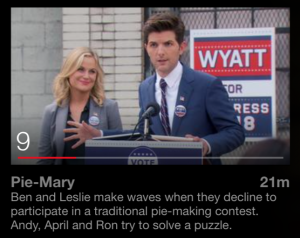 One thought on “You Can’t Make Everyone Happy”