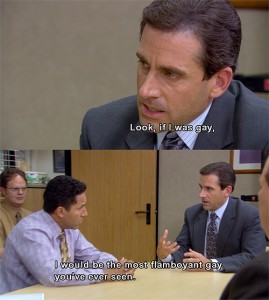 Season 3 of NBC’s hit television sitcom The Office kicked off with an episode entitled “Gay Witch Hunt.” In the episode, the employees of Dunder Mifflin paper company are faced with circumstances unlike any they have encountered: a gay person working in their midst. The episode follows the unintentional outing of Oscar, one of the accountants. Throughout the episode, the manager Michael struggles to come to terms with Oscar’s homosexuality and what it entails for the workplace. Other fellow coworkers also begin to treat Oscar differently after learning about his sexuality. Considering The Office as a satire of the American workplace, the episode effectively conveys the absurdity of stereotypes about the gay community through the characters of Michael and Dwight. Conversely, other characters act as a voice of reason in opposition that ultimately yields a positive message about homosexuals in workplace environments.

Michael functions as a caricaturized image of a heteronormative boss ignorant about workplace etiquette and the day-to-day existence of gay individuals. Michael’s actions ultimately create a hostile work environment for Oscar, yet he remains ignorant about their implications. The episode begins with Michael meeting the head of human resources regarding a complaint by Oscar that Michael called him “faggy.” He comments that he does not understand why it would be offensive and says the office is fun because he gets to joke with people and call them “faggy” when they are acting “lame.” Upon learning that Oscar actually is gay, Michael struggles to reconcile with his actions. Because he used the term “faggy” under the assumption that everyone was straight, he becomes shocked and discomforted by the idea of a gay person being in the office. Subsequently in an aside to the camera, Michael says, “you don’t call retarded people retards…you call your friends retards when they’re acting retarded.” Through this statement, Michael shows that he continues to operate under the presumption that the use of slurs is appropriate if the word is not literally applicable to the person. Following this initial situation, Michael becomes obsessed with discovering who else in the office is gay so that he will not offend anyone. Rather than speaking in an office-appropriate manner, he seeks to discover whom it is appropriate to make such jokes with. This situation mocks the intense political-correctness culture that exists in many corporate workplace environments. Finally, Michael falls into tropes surrounding gay men in the working world. He states, “gay people can be businessmen…like antique dealers or hairdressers.” By default, Michael only imagines gay people occupying more effeminate positions in their professions.

Similar to Michael, Dwight acts a representation of people with old-fashioned notions about what being homosexual entails. Upon Michael disclosing that Oscar is gay, Dwight claims that Oscar cannot be gay because: “he’s not wearing women’s clothes.” While Michael’s homophobia and offensiveness gets delivered to the audience in a subtle manner, Dwight’s ideas about homosexuality are more overtly ridiculous. His notions fall into the overarching claim that all gay men are effeminate and lesbian women are masculine. Later in the episode he claims that one of his female coworkers might also be gay, “look at Phyllis…she makes no attempt to be feminine.” Considering this evidence, Dwight sees gender playing a greater role as the main factor in determining sexuality.

Michael and Dwight represent the hysteria that the title of the episode implies. “Gay Witch Hunt” suggests a relentless search to out anyone who is gay within the office. Indeed, the environment that Michael and Dwight create quickly becomes hostile because of their obsession. This frenzy comes as a result of their assumptions about the demographics of the office. Presumed heterosexual hegemony causes Oscar to be unintentionally outed, and leads them to pursue discovering every homosexual within the office.

While Dwight and Michael serve as centers of satire, voices of reason fight back against their ideas. Specifically, one scene shows Michael’s superior and a human resources employee lecturing him about the implications of his actions. They tell him that he effectively outed Oscar by how he handled the situation, and that Oscar now feels discriminated against. Juxtaposed against this rational discussion, Michael gets confused by what he perceives as shame on Oscar’s part. He feels that gays should be prideful. This specific scene serves to further the satire by depicting these voices in direct conflict with each other.

Despite the forward-looking depiction of a homosexual man in the American workplace, the show falls into some conventional tropes of the stereotypical gay man. Though he is Latino, Oscar is still a middle-class, white-collar worker. So even though the show’s message points in the right direction, it limits the message to a specific type of gay man. The show regularly features episodes that focus on the workers in the paper warehouse just below the office. Why couldn’t one of them be gay? Why did they decide to make Oscar gay and not another character? American television recently has been going in the right direction by depicting more LGBTQ narratives, however this narrative has been largely singular in terms of socioeconomic class and profession.

As evidenced by this episode of The Office, satire and farce are effective means of exaggeration to point out the ills of society. In this case, homophobia is the central target of the criticism. Michael and Dwight’s overt buffoonery makes it simple for the show writers to make their point. The audience’s familiarity with the absurd behavior of these two characters provides the perfect platform for depicting the problems with workplace-specific and general homophobia. Regardless, the show still presents a narrow narrative regarding homosexuality in the workplace.

Note: The episode is available on Netflix, but I wasn’t able to find the full episode anywhere online for free. A couple of YouTube clips are linked below.