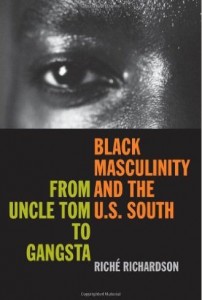 I first picked up Riché Richardson’s book, Black Masculinity in the U.S. South: From Uncle Tom to Gangsta solely because I have great respect anyone who can get a scholarly work published with the word “gangsta” in the title. I was unprepared for the depth and scope of the work I had before me. Upon initially picking up the book, I was surprised by what felt like a narrow approach to a broad topic. Richardson approaches her subject through the lens of southern black literature (not the well-known kind) published mostly in the 1960’s-1980’s. As I read, I changed my mind about just how narrow Richardson’s lens was. Upon finishing the book, Richardson’s choice of popular film, literature, and music appeared suited vehicles through which to explore to the portrayal of black southern masculinity.

Riché Richardson was an associate professor of English at the University of California Davis when she first published Black Masculinity. She credits personal interest in the south as one of the major motivators in pursuing the project: “Admittedly, my background as an African American born and raised in the south has partly fueled my passion to engage in systematic critical reflection on the region,” says Richardson in her introduction.[1] She credits scholars in the Duke English department for allowing her the creativity to be experimental in her methods in a time when the field of “southern studies” was in the process of big change. The change to which Richardson referred was the development of the field of “new southern Studies;” Black Masculinity is Richardson’s foray into this field. Richardson’s second intervention is into the field of black masculinity. Recent years have brought scholarship investigating hierarchies of sexuality within black masculinity, “however,” Richardson argues, “beyond the expanded conceptions of black masculinity yielded by the work on sexuality, black men frequently continue to be treated as an undifferentiated and monolithic racial and gender category.”[2] Black Masculinity and the U.S. South is Richardson’s venture into the intersecting fields of southern studies and studies of black masculinity.

Richardson begins chapter one with the identification of three “types” of black masculinity, both of which are clearly rooted in the south: the bad negro and the black rapist. The bad negro is the black man who is a lawbreaker and a trouble maker. Richardson roots the bad negro type firmly in the south by claiming him as “an outgrowth of the “rebel slave,” with roots in African American folklore.”[3] The bad negro of the civil rights era was “not essentially bad so much as the fruit of the repressive southern Jim Crow ethos.”[4] The second type –the black rapist—grows out of the bad negro. The black rapist is the white supremacist version of the bad negro. He is not only bad, he is dirty and animalistic: he has designs to pollute the white race by raping white women. The third type is the antithesis of the first two: the uncle Tom is the passive and has evolved into an asexual (and sometimes homosexual) type. The black rapist is primarily a vehicle of white oppression, the uncle Tom is primarily a vehicle of black oppression: the bad negro has been used by both groups to oppress southern black men.

All three types are key to Richardson’s analysis. In Chapter one, Richardson turns to a reflection of the bad negro and the black rapist in white supremacist thought as explored in William Bradford Huie’s novel The Klansman. (Which is itself a complicated parody of and reflection upon the white supremacist thought prevalent in The Birth of a Nation and The Clansman). The movie The Klansman, released seven years later, offers a reflection on the way that the types influenced the black power movements of the 1960’s. Richardson argues that changes made in Huie’s novel when it was adapted for screenplay reflect the appropriation of the bad negro type by the black power movement. Authentic black masculinity was linked with violence in resistance: by shifting a key scene in the novel away from the rape of a black woman and onto the lynching of a black man, the creators of the movie the Klansman highlight white supremacists’ attack on black masculinity. Richardson finishes her chapter with an analysis of O.J. Simpson’s characterization of a “bad negro” type following his arrest ad highly-publicized trial. The bad negro and the black rapist type are mixed in O.J.’s portrayal when his white wife is examined as a part of his identity.

Chapters two and three move beyond Richardson’s analysis of black masculine identity in the south as formulated by white supremacists and into the inner hierarchies of black masculinity. Richardson uses chapter two to explore the hierarchies of black masculinity, and chapter three to connect the white supremacist ideologies of the bad negro and black rapist to the formation of the black masculine hierarchy. Richardson uses the vehicle of Charles Fuller’s work A Soldier’s Play to begin to examine how black men relate among themselves. Through the struggles of an all-black army unit in WWII, Richardson argues that Fuller exposes the stereotypes of southern black men that are used for their degradation, such as stupidity and animalistic sexuality (both of which are based in the white supremacist thought that produced types such as the black rapist). In Richardson’s argument, I was beginning to see the connection between a black southern masculine identity, as defined by white supremacists, and the denigration of black southern men by other black men. Fuller’s exploration of this denigration, argues Richardson, was intended to expose the flaws in hierarchical black masculinity. Richardson believes Fuller failed, and I was inclined to agree. Fuller, in assigning the Northern Black male as the hero of the story and relegating the southern male character to a silent death, perpetuates the hierarchy that places southern black masculinity below that of the urban north.

Chapter three, and Ralph Elison’s Invisible Man, allow Richardson to explain why hierarchies like those exposed through Fuller’s A Soldier’s Play exist, through the lens of black rural otherness. Richardson argues that Elison’s use of Invisible Man to juxtapose white American subjectivity with elite notions of blackness within the African American south exposes the root of the subjugation of southern black masculinities to other black masculinities: the discourse of southern white supremacists, who use the black rapist character to identify the southern black male with animalistic sexuality, allows other black masculinities a sense of superiority. Richardson’s exploration of Invisible Man was the glue that held chapters one and two together, and began to weave the created types of black masculine identity into black men’s own performance of their masculinity.

Richardson explores how this dominant ideology of northern (and urban) masculinity was expanded by the  black power movement of the 1960’s: specifically the speeches of Malcom X. Malcom X subjugated not only southern black masculinity, in ferociously denying his southern roots, but also through the use of the uncle Tom type. In several speeches, Malcom X invoked the uncle Tom as not only a rural and passive character, but also as a character that was homosexual: pleasing his white master and desiring him in an erotic and subservient way. By invoking the uncle Tom as homosexual, rural, and passive, Richardson holds that Malcom X links authentic black masculinity with an urban setting, heterosexuality, and violence. According to Richardson, this hyper-masculine, sexualized type of back masculinity is perpetuated by Spike Lee in his films of the 1960’s such as Get on the Bus, School Daze, and Bamboozled. Richardson sets up her final chapter when she argues that Malcom X and Spike Lee’s promotion of violent urban and sexualized black masculinity paved the way for the rise of gangsta rap.

Richardson shows how young black rappers claiming to “gangstas” and “playas” is just a re-casting of the bad negro and black rapist types initiated by white supremacists in the beginning of the formation of black masculine identity in the south. Southern rap has thrived playing with the stereotypes of which it is all-too conscious. Southern rappers have “turned southern stereotypes into a commodity.”[6] Yet, it appeared to me that the black southern rappers of Richardson’s final

chapter fell into just the same traps as the novelists in the chapters before them; calling out southern stereotypes only reinforces them, and secures the idea of a urban and northern masculine identity. At one point, Richardson analyzes Joe Blakk’s “Way Down South” and comes to the same conclusions as I did: “While it confronts the condescending attitudes of Northerners, the message of “Way Down South,” which at bottom, says that “we are just like you” in some ways concedes the superiority and exemplariness of northern models of black masculinity. The South emerges as a mere simulacrum by its logic.”[7]

And maybe, just maybe, a definition of the essence of southern black masculinity was not the goal for which Richardson was aiming. Black Masculinity and the U.S. South is a strong examination of the historical treatment of the black male identity as evidenced through cultural artifacts. Richardson’s use of texts and film is engaging, and effective when in each chapter she pairs the cultural artifact with a historical or current event. When discussing The Birth of a Nation, for example, Richardson displayed the relevance of her argument by connecting her theory of the film to O.J. Simpson’s trial. After reading Black Masculinity, I am convinced of the need for a geographical analysis of identity categories, especially when it comes to race. Richardson’s argument that much of universal black masculinity finds its roots in the south is compelling, as is her argument that southern black masculinity is subjugated through the use of historical types. In light of this subjugation, asking for a historical definition of southern black masculinity may be beside the point. The most important part of investigating black masculinity in the U.S. south may be the way it engages historically, not its essence. Maybe all Richardson’s work needs is a new title : Cultural Reactions to Black Masculinity and the U.S. South, or something along those lines. Of course, if only for the sake of my own interest, she’ll have to keep “gangsta” in the title.