Day by day interactions with the world lead to many an unanswered question in our minds. When it comes down to the hard ones – figuring out what type of domesticated animal you are or how much your relationship resembles Beyoncé’s, there is only one place to turn: Buzzfeed. This social media entertainment web-sphere creates everything from memes to movies for their readers, who are usually young adults. The most enticing thing about all of Buzzfeed’s posts and articles is the quick, easy to read and comprehend quality. Everything opened will be closed within 3 minutes, have plenty of visuals to grab attention, and language that is up to date with pop culture. When looking at a particular video created by Buzzfeed called “8 Types of Girls You’ve Danced with”, the question comes up: why is this video so easily entertaining to their target audience? While I may not be immune to the tempting articles on puppies, I aim to answer this question by pointing out the assumptions and stereotypes of gender, sexuality and race present in this Buzzfeed video.

The video is presented to us through first person. For a little more than 1 minute, the camera, representing ‘us’ as the dancer, dances with 8 different females that all have catchy nicknames and corresponding personalities. I say personalities and not dance behavior as there are actually no references to how that woman dances or their style. I will return to this later. Its purpose is to entertain and humorously relate to a person’s dance experiences.

The viewer of the video starts watching with this first person perspective and places themselves in the position of the one being danced with. This allows one to relate to the person being danced with, with the shaky camera movements and eye contact directly to the viewer. One feels as if they are truly the female’s dance partner. The dancing view of the camera and characters talking directly to you brings forth the humor of the video as well. However, 35 seconds into the video, a selfie reveals behind the camera. The picture shows the female being presented, ‘The Photographer’, and the person revealed is male. This reveal breaks open the effect of first person. Now the video has shown the viewer the person dancing with all of these females is most likely male, and has been all along. The first assumption has been brought into the video. There is now a heteronormative perspective to look through. This reveal has multiple effects. Firstly, the relatedness has been shattered. For some, there is no relating to the male’s gender. Further, since there is now a face and distinct person assigned to behind the camera, the video is no longer first person. It is as if a veil has been lifted. Although the veil may be placed back in front of one’s vision, they still know who is under the veil. This reveal does represent a societally comfortable lens of heteronormativity though; seeing a male and female dancing together is more comfortable in a person’s mind in this contemporary society and makes it easier to watch this video. This use of heteronormativity, while destroying one’s ability to relate to the video, does provide a space that is assumed typical in society for our brains to imagine.

Each dancer in the video is named with text that describes their personality. As I stated before, none of the descriptions of the females include any reference to their dancing moves or style. All are representative of the characteristics they display on screen. Further, almost every single one of the 8 female characteristics shown correspond with a typical female stereotype. Here are a few of the examples of the portrayal of the females in this video, and the underlying assumptions that each nickname and corresponding traits bring forth. The first female is ‘The Texter’ who only texts while dancing. This goes along with the stereotype of a female being vapid and unconcerned about important issues and life around her. ‘The Mess’ is a drunk woman who can’t control herself, an age old stereotype. This points to the idea of women being stupid and unable to take care of themselves. It also subtlety reinforces rape culture by placing the inability to care for oneself on the fault of the woman, and therefore leaves a space open to blame her for events to come. The ‘Leave Room for Jesus’ is taking jabs at the idea of a religious women that has a certain set of beliefs by representing her as someone who is fairly unwilling to dance. This character is countered and immediately followed by her opposite, ‘The Pro’, a seductive figure who is very willing to dance. This age old dichotomy of the ‘virgin and the seductress’ is a common theme when talking about women throughout history. Freud coined this phenomenon as the Madonna-whore complex. Women’s sexuality has been seen in these binary terms; it is pure or impure, suited for a man’s marriage or suited for his lust. This phenomenon is present throughout culture and appears specifically in visual history. Works of art spanning from 1400 by Carlo da Camerino with The Madonna of Humility with the Temptation of Eve (left image) to Edvard Munch’s Women in Three Stages from 1895 (right image) show this very dichotomy. 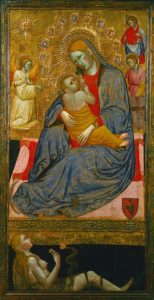 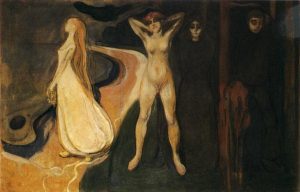 It is interesting that in an entertainment video of today this same theme is brought forth. The last female character is ‘The Clinger’, a dance partner who won’t let the (male) partner escape. The stereotype brought forth is the female as a dependent only looking for and needing the attention of a man. Laid out in this fashion, these female personas make one cringe with the blatancy of the sexist stereotypes. However, Buzzfeed chose these because these assumptions make it easy to classify females in contemporary minds. These stereotypes and themes are still around, easy to understand, and easy to create.

The last stereotype this Buzzfeed video utilizes happens when the female character ‘The Hair’ is shown. There is really no sugar coating this pretty flagrantly racist portrayal of the only female of color in the video. Her character’s face is never shown, instead an image of her hair is shown taking up the whole view of the camera for about 10 seconds. This is problematic for a couple reasons. First the woman’s face is never shown, meaning that not only has this character been narrowed down to one trait, but she is not even allowed the humanity of the face. Second, the only representation of a woman of color in the whole video is one where her face isn’t even shown. And last, the history of shame and prejudice against a woman of color in regards to her hair is as old and thorough as the history of racism. Women of color and their natural hair are underrepresented now and throughout media history. This background in our society means Buzzfeed’s choice to use black hair as their representation of a faceless woman who is hard to dance with is intentional and relatable to contemporary media. I cannot speak for anyone, but it seems with this choice Buzzfeed would pretty easily offend lots of people of color. Whether their audience truly is more white or they have just catered to their white audience’s historical media assumptions means the same thing, Buzzfeed’s target audience is white.

Almost more frightening than this video is the paired video Buzzfeed created called “6 Types of Guys You’ve Danced with”. The video begins right away with the heteronormative assumption: this time the camera view is in third person and the person dancing with all the males is a female. There is an underlying masculinity assumption underneath all the male personas that each needs to impress this female somehow through different means. As opposed to degrading stereotypes, there is an assumption of impressing and a focus on success. This paired video shows us that these videos are not anomalies in Buzzfeed’s collection. The video “8 Types of Girls You’ve Danced with” is focused on quick, relatable humor for Buzzfeed’s audience. It does this by incorporating a heteronormative lens, using age old categories to define different women, and stereotypes on black hair to ease their (white) audience in through assumptions that have been present throughout history. It’s easy to look back at all the subtleties present in this video and scoff, but the reason they make audiences feel comfortable is because they are not only society wide but present in many other contemporary forms of media. So when reading the news or scrolling through the internet, go forth and take that quiz on cheese Buzzfeed has made; but remember they too are victim to the contemporary conventions surrounding gender, sexuality, and race.