“We want our children and all children in this nation to know that the only limits to the height of your achievements is the reach of your dreams and your willingness to work for them.” Melania Trump spok 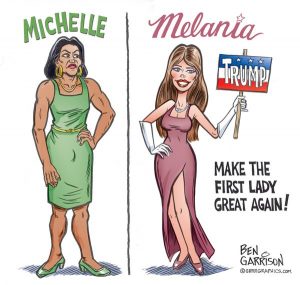 e these words at the 2016 Republican National Convention. Perhaps because these words were so poignant and eloquent, it did not take long to journalist Jarrett Hill to show the American public that Melania did not come up with them. Instead, she plagarized Michelle Obama’s 2008 speech from the Democratic National Convention. Shockingly, despite the fact that the First Lady’s intellectual property was stolen on the national stage, no one from the Trump campaign was fired. The Trumps got away with it with no significant loss in support.

But why are Trump fans so loyal to Melania and the Trump clan? Obviously, there is no simple answer to this question, but Ben Garrison, in this May 2016 cartoon, taps into some of the worrisome perceptions about possible future First Lady, Melania Trump and why the American public might be supportive. This cartoon primarily cites the centerfold of the Trump campaign,  “Make America Great Again” to contrast the capabilities of Michelle Obama and Melania Trump. However, the cartoonist only makes strides to represent their differences to be “great” through the depiction of their bodies. All of the visual  differences between Trump and Obama point to one underlying message of the cartoonist: Michelle Obama is less equipped to be a “great” first lady, and has not carried out the position properly. Garrison argues though, that Melania will be able to make the “First Lady great again” for reasons of her physical presentation, the color of her skin, and her femininity.

Immediately, my eye was drawn to the green dress on Michelle Obama. This color green invokes a monster-ish feel, which is in direct contrast to the red dress on Melania. Melania is depicted in an elegant flashy gown, with pearls and fancy make-up.  In fact, Melania’s slit dress is reminiscent of the dress Angelina Jolie wore to the 2012 Oscars. Michelle on the other hand, is wearing chunkier jewelry. Her whole look is far less upscale  than the way that Melania’s is portrayed- white gloves, ball gown in all. Garrison uses this tactic to demonstrate that Melania will bring a level of glamour to the White House in the same way a movie star would, while Michelle’s dress in an ogre-green makes strides towards dehumanizing her. In other words, Garrison  depicts Melania in an expensive outfit, Michelle in one that is “cheap”- Melania is rich and glamorous, while Michelle is poor and less than human. But the notion that their physical representations matter in the evaluation of their “greatness” contributes to the pervasive sexist undertone of the entire cartoon.

Furthermore, there is a racist visual message that is very difficult to ignore. Michelle’s facial expression is in a fixed and disapproving scowl, and the hand on her hip makes her appear stand-offish and enraged. Her whole presence invokes the stereotype of the angry black woman.  In her article, Controlling Images and Black Women’s Oppression, Collins points out, “ As  overly  aggressive,  unfeminine  women,  Black  matriarchs  allegedly  emasculate  their  lovers  and  husbands” [1].  This racist bias holds that black women are oftentimes so “aggressive”that they push people away.  This depiction of Michelle as scowling is degrading because it not only traps her in the stereotype of an angry black woman, but also sends the message that she is not worthy of admiration.  Melania on the other hand, is in a gentle and approachable pose, with a happy smile on her face. Garrison is furthering his argument that Michelle was the kind of First Lady that leaves room for improvement, since she was so aggressive and mean, while Melania is soft, approachable and worthy of admiration. But underlying this attempt to place Melania in a positive light, is the unignorable racial bias that part of the reason Michelle is angry and mad is not only because she is not “great” but  she is not great in part because of the color of her skin.

Lastly, and perhaps most blatantly, Garrison is saying in this cartoon that Michelle failed at her role as a good first lady because of her masculine figure. Michelle’s bulging muscles and strong stature are in direct contrast to the ultra-feminine pose of Melania. In fact, Melania’s figure is almost hyper-sexualized. The large slit in her ball gown is suggestive at best, and an explicit objectification of her body at worst.  Furthermore, Michelle is flat chested and lacking curves,  in comparison to her busty and curvy counterpart. Not only is this an attempt to emasculate Michelle and reveal her as less “womanly” because of the shape of her body, it also sends the message that Melania is more valuable as a first lady because of her physique. Through the depiction of their bodies, Garrison is sending the message that Melania is going to be better at this position of first lady than Michelle ever was because she is looks more like what a woman “should” look like. There is nothing to do with the compared content of their brains, or their hearts for that matter, but rather there is an explicit message that the shape of their bodies and their sexual attractiveness is what should be compared.

Garrison asserts that Melania is better at this conceived role for three main reasons; her physical beauty, the color of her skin, and her perceived femininity. He makes strides to depict Michelle as unattractive and harsh looking, while Melania is physically beautiful, elegant, and well-dressed. Furthermore, Melania is a “great” candidate for First Lady because her presence as a white woman is far less threatening than the depiction of Michelle as an angry, menacing black woman. Lastly, Garrison depicts Melania as a clear preference for First Lady because her body is the feminine ideal. She is curvy, voluptuous, and sexualized, while Michelle is strong in stature and more “manly.” This last idea in particular furthers the idea that a woman matters, only if a man finds her attractive and would want to have sex with her. In all, the extreme contrast in the physical appearance of both women is built on the notion that a woman has worth because of the way that she looks, and only if she looks “great.”

This cartoon is so wrong for so many reasons.  In this cartoon Michelle is attacked for not only being a woman, not only being a black woman, but being a black woman who is not as “sexy” as Melania Trump. Garrison and his hateful opinions reveal a scary voice in the American story. Garrison’s is a voice that screams and taunts and hides behind the concept of “free speech.” I will admit, I oftentimes want to believe that this voice has no power. But with the 2016 election coming up, it is more important than ever to reveal Garrison’s voice for what it truly is- a scared whisper stemming from a hateful mind and a fearful heart.