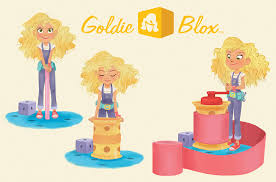 Pretty in Pink? Media Analysis of a “Progressive” Toy

Gender as a concept is a systemic structure that begins affecting children at a young age. The manipulation of gender and sex starts with advertisements for items such as toys, clothes, and furniture that mold the way children see themselves as soon as they are old enough to register what they see and hear on television and in print. Mass media and industry pushes the binary as a way to sell more items and this process requires children to pick a side: either the feminine side, where the toys are centered on appearance and homemaking, or the masculine, where the toys are more aggressive and active. The push towards a more inclusive toy industry is warped, and is seen through a recent advertisement for a toy called GoldieBlox. GoldieBlox is a set of building blocks and is focused on attracting a young, female audience. The commercial seems to reject the pink, princess-centric world of girls’ toys for a more scientific, active toy. What this commercial does not address, however, is the reinforcement that there are two types of girls: one that enjoys the norm and one that does not fit what we traditionally perceive as a girl’s toy. When the girl does not fit the norm, she is automatically placed in the other category, in which it is imperative that she maintains her femininity even though she rejects the traditional set of toys. In this way, the toy industry’s push to design more “inclusive” toys still remain solidly in the gender binary.

This GoldieBlox commercial, aptly named “The Princess Machine” begins by showing three girls sitting in front of the television, bored by the advertisement for a girly toy. The commercial proceeds when the girls don safety goggles and decide to construct an elaborate machine from their girly toys, such as baby carriages and tea sets. The girls work together to create a series of pulleys, levers, and ramps that extend throughout their whole house, creating a domino effect that moves a ball along the trail of toys. The girls run alongside the ball as it travels from room to room, eagerly awaiting the finale. The advertisement shows them enjoying their final product, which changes the television channel that originally showed the feminine toy commercial to an advertisement for this specific toy. The girls then cheer and celebrate their invention.

This advertisement is expertly crafted in order to appear to be advocating change in how toys are marketed to children, but only breaks down the feminine stereotype enough that it is comfortably available to the mainstream. An example of how it remains entwined in the binary is the toy’s pink packaging, showing a smiling blond girl on the box, plays directly into preconceived and accepted notions of what young girls should look like and how they should spend their time. This toy is no more evolutionary than a Barbie, and is a exemplary instance of Judith Halberstam’s argument in An Introduction to Female Masculinity that, “tomboyism may even be encouraged to the extent that it remains comfortably linked to a stable sense of a girl identity” (6). Girls are allowed to express themselves through traditionally masculine toys only until they hit puberty, when they are expected to become feminine, docile, and disinterested in masculine pursuits. Another interesting aspect of this commercial is its name: The Princess Machine. The name is not mentioned anywhere in the video, but can be found by searching it by name. The naming of this commercial is crucial to the argument that social norms can only be pushed so far, and not broken, as to create discomfort for the audience. The title of this commercial asserts that, although these girls do not want to be princesses, they can still create something feminine and acceptable to the gender binary. Notable, as well, is the race of the girl on the packaging. The use of a blond girl, though cartoon, asserts the argument that this toy is focused on maintaining what the media sells as acceptable for girls to be: white, “pretty”, and feminine. Not only is this toy selling the binary, its selling what society is groomed to think of as beautiful. The commercial, much like it does to the binary, pushes the idea of inclusivity just barely, by including one Caucasian and two girls of colors in it. The packaging tells the consumer that this is the ideal and is the first part of the toy little girls will see, which is no different than any other of the white centric, mainstream advertisements see across all industries. All these aspects of the commercial and packaging are, in a not so subtle way, asserting society’s views that being white, blond, and cis-gender is the ideal identity of a child.

The binary further asserts itself in the sub context of this commercial, narrowing the entire female gender to one of two categories: those who enjoy baby dolls and tea sets, and another, which rejects these items. The commercial seems to, at first glance, break down the stigma that girls enjoy playing solely with baby dolls and tea sets, but the makers have only given females one other option. By discussing femininity by only giving an alternative, this commercial’s message is very similar to the mainstream, exclusive message of the gender binary. This message is reminiscent of Wilchins’ Queer Theory, Gender Theory and her idea that, “Woman could do anything men could do and still retain their femininity” (8). Wilchins is discussing how, instead of completely breaking down and eradicating gender norms, it is popular now to offer an alternative to the “girly girl” while still remaining what is commonly thought of as feminine and therefore comfortable for the general population. Wilchins’ assertion is related to an image seen at the end of the commercial, with the three girls standing shoulder to shoulder, arms crossed, wearing their construction belts and safety goggles. Although this would be considered a common frame if it were little boys, the girls have to remain feminine by wearing girly clothes as to not disrupt the binary. Another pertinent topic discussed by Wilchins is the idea of gender expression, which she defines as, “the manifestation of an individual’s fundamental sense of being masculine or feminine through clothing, behavior, grooming, etc.” As long as the toy user’s gender expression is one that has been seen before and accepted by society, she is allowed to freely enjoy her blocks or dolls. If she were to start acting like or identifying as more masculine, Wilchins says, “[people] will probably be shocked, disgusted, or at least turned off” (9). GoldieBlox is an excellent example of the cunningness of advertisers, who play to their consumer to sell more products.

GoldieBlox is a toy marketed towards an apparent shift in commercial industry towards a more inclusive, neutral business. When analyzed, however, GoldieBlox and its corresponding advertisement do nothing to break down stereotypes and expectations placed on children and the activities they enjoy doing. The resulting advertisement is a misrepresentation of what is it to be a girl with interests that do not include traditional girly toys and fails to acknowledge that feminine ideals are ever present and still being embedded in the minds of the girls watching these commercials.

One thought on “Pretty in Pink? A Media Analysis of a “Progressive” Toy”