Although a rather recent tool, the media has been a crucial part of advertising for millions of companies worldwide. Major food and drink corporations have utilized the media to expose their products internationally, including one of the top companies in the world, Coca-Cola. Researchers have studied the effects that advertising can have on a person, specifically on how advertisements can subconsciously shape the way someone thinks or acts. This is often referred to as a subliminal message or a subliminal stimulus. With this in mind, it is important to explore some of the more explicitly gendered or sexist advertisements and what kind of effect they may have on an audience, whether that audience is cognizant of that effect or not.

Back in 2011, Dr. Pepper released an ad for their low-caloric soda. Right off the bat, it is easy to tell that the ad was made with a male audience in mind. In the past, companies have had a difficult time of selling diet sodas to men because it is stereotypically considered a “girly” drink. So, in order to appeal the drink to men, Dr. 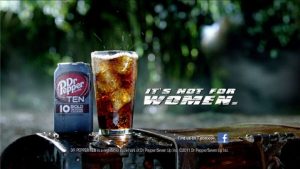 Pepper plastered the words “Not For Women” across the print advertisement. The thirty-second commercial begins with a muscular man holding what appears to be a bazooka gun. There are explosions occurring around him, and jungle creatures seem to be chasing him. After shooting the gun a few times, he jumps off of a cliff into a jeep, where he then pulls out his Dr. Pepper TEN. “It’s only ten manly calories,” he yells over the roar of the motorcycles chasing behind him, with gunfire surrounding him. Then, he says, “So you can keep the romantic comedies and lady drinks, we’re good.” as he gestures toward his Dr. Pepper can. There are several aspects of this ad that are important to analyze. Firstly, the print version states very explicitly that this drink is just not for women. This speaks to the fragile masculinity that society has conditioned men to have.

In order to get men to buy diet soda, Dr. Pepper felt the need to blatantly say that the drink was simply too manly for women. Looking at the commercial a bit more closely, stereotypes revolving around men are basically jumping out of the screen. Which begs the question, what makes a man a man?

According to this Dr. Pepper commercial, a man can simultaneously drink a low-caloric soda and shoot guns while escaping from a disguised motorcycle gang. A man does not need romantic comedies and lady drinks, for that would just be a hindrance to him. The way this specific statement is presented encourages viewers just to believe it and not even wonder what exactly a lady drink is. However, it does not seem to matter for the purpose of this commercial, as long as Dr. Pepper’s Big Ten drink makes men feel like men. These tongue-in-cheek jokes about romantic comedies and lady drinks feed into yet another series of stereotypes, yet this time alternatively surrounding what women are supposed to act like and have interest in. Therefore, it can be analyzed that Dr. Pepper’s construction of a man is based off of what a woman is and what a woman is not. Not only is this problematic for obvious sexist reasons, but it also reinforces the distinct gender binary. So two things are at play here: the stereotyping of both men and women, which is where what we typically think of as blatant sexism is most prominent, and the reaffirmation of society’s continuous preaching that there are strictly only two genders. Certain qualities are strictly associated with men and certain qualities are strictly associated with women. Throughout this commercial, there is no fluidity. The movie Three to Infinity: Beyond Two Genders explores this concept of gender as a spectrum, rather than two distinct categories. However, as exemplified by the Dr. Pepper commercial, the rest of society considers this idea of more than two genders, or a lack of gender in general, to be radical.

Coca-Cola dipped yet another toe in to the sexist pool when they published an ad campaign promoting Sprite in Ireland. These advertisements included sayings like “She’s seen more ceilings than Michelangelo” and “She’s a 2 at 10 and a 10 at 2”. 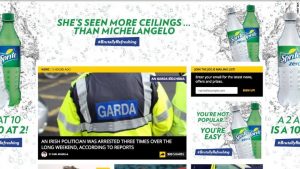 The ads were quickly slammed and Coco-Cola came out with a public apology. Once again, Sprite was clearly trying to appeal to a heterosexual male audience. So, much like the Dr. Pepper commercial, Sprite felt the need to make men feel as if they are more worthy than women in order to appeal to their masculinity, which is important even in choosing what soda to drink. Not only do these ads objectify women, but they also in turn perpetuate a frightening rape culture, which leads right back to the superiority/inferiority dynamic of the traditional gender binary, as mentioned before.

Although recently pop culture has begun to become accepting of the queer community and has also strayed away from dehumanizing women, it is clear that big name companies still find appealing to men’s sensitivity to being feminine as a good marketing strategy. Even Coca-Cola, which is often times considered a progressive company, has used humor to cover up their sexist and gender binary centric advertisements. However, the more often these types of subtle sexist remarks are talked about, the larger the discourse surrounding gender becomes. Discourse leads to solution.