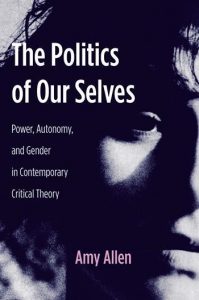 Society is built on learned behaviors based on the values of the time. The most impactful source of power comes from social constructs. Social constructs start to have an effect on people as soon as we begin to identify as an individual being. A child will start to look at social queues in order to begin to form their individual personality, and a lot of it is based on what they are able to observe others doing. We mimic behaviors in order to belong to the group. As children, it is very easy to take to heart a lot of what we are told, and there is little speculation on why things are the way they are for children.  The autonomy levels of a person keep expanding as we get older because we are better able to think of ourselves in separated ways. Amy Allen, in her work, will take a deeper look into the autonomy of subjects and frame it along some of Foucault’s theories.

The politics of the self is centered around synthesizing the ideas of many theories. The first thing in the introduction of the is Foucault. The title of the book is taken from one of Foucault quotes; in the quote from Foucault, he is talking about the manner in which to understand the self, there is less of a need to understand the positive aspects of the self, but rather the way in which outside influences such as history and technology have come to affect the politics of our selves. Amy Allen, in her work, she works to analyze the power of subjection and looking at autonomy as a force of self-construction. The book is an intersection of feminism and critical theories. Along with the theoretical accounts, she looks into analyzing the subordination caused by race, class, and sexuality. Her approach critiques these subordinations and considers the social changes that need to come about in order for the changes to be accomplished. In the introduction she states she wishes to create a “Framework that illuminates both aspects of the politics of the self” (Allen, para 4). The two aspects she is talking about in regards to the politics of the self are: power and autonomy (Allen, Para 4).

Allen is a Professor of Philosophy and Women’s and Gender Studies at Dartmouth College. She has done some of her work focusing on how gender subordination must not only encompass race, class, sexuality and gender but must also confront issues dealing with social structures and the effects of colonialism (DesAutels). She brings in a very philosophical approach to the way in which she evaluates the politics of the self and how they are built in a very intersectional manner. The way she writes the book reflects her way of interconnecting ideas because she creates a discourse among many of the different theories relating to feminism, sexuality, and race among other things. Power and autonomy play a big role in the development of social structures because power is the driving force, while autonomy relates to the development of the self within the complex power structures.

A lot of her arguments are integrated with looking at a lot of Foucault’s ideas. What we looked at in class was Foucault’s “repressive hypothesis.” The repressive hypothesis believes that since the rise of the bourgeoisie in the Victorian era, any outflow of simply pleasurable activities has been frowned upon. As a result, sex has been confined to more private spaces and was restricted in open discourses. The only practical and accepted manner of display of sexual discourse took place between a husband and a wife. Sex outside these confines is not simply prohibited, but repressed. That is, there is not simply an effort to prevent extra-marital sex, but also an effort to make it unspeakable and unthinkable. Discourse on sexuality is confined to marriage. The power structure in his idea relates to how the book analyzes the subordination that is caused by repressive discourse. The autonomy of the person is therefore hindered because of the restrictive nature of the power of social norms and ideologies.

Discourse is important to Foucault because to him, language and knowledge are closely linked to power. Speech and writing are not simply the communication of facts that occurs in a vacuum, but instead, they give momentum to ideas and criticism. In her second chapter, she evaluates Foucault’s relationship with Kant’s work. “What Foucault is calling for is a critique of critique, which means not only a criticism of Kant’s project for the way in which it closes off the very opening for thought that it had created”(Allen, ch 2) She evaluates the different theorist through the lens of Foucault. In this, she is trying to relate the arguments by saying that Kant’s writing transcends and helps him shape the notion of subjectivity. To Foucault, Subjectivity is a means to explore the conditions in which subjects are created via discourse and sociocultural conditions. These conditions allow for an analysis of the self in order to evaluate the modern self. What is helpful in her evaluations is how she brings together the ideas jumping back and forth between the different theorist in order to create an argument of her own. In her evaluation, a lot of the theories, such as the one mentioned above, are in discourse with each other in helping to expand the idea of the subjectivity and how people are created through various elements. When she mentions power in parallel to Foucault she ties it into the relationship it has with the repressive hypothesis. She mentions in chapter three how power is a relation of repression, her aim with this is to reconstruct autonomy and argue about how it extends to power and subjectivity (Allen, Ch 3).

One of the things I liked about the book that makes it have a strong argument is the intersection of the different works of theory she incorporates into her evaluation of power. The book has a very introspective form to writing. It doesn’t directly ask the reader to look at themselves through her personal theory alone, but instead, it synthesizes a lot of the different theories of subjectivity that help create the individual in relation to power and autonomy. The points she makes are easy to understand, because before starting to read there are subheadings within the chapter to help guide you to her main arguments. Having the sub-headings allows for her work to follow a flow and move from the different ideas of power, subordination, and autonomy.

There was a lot of theories we have not discussed yet in class, but it was interesting to be exposed to a wider world other thoughts regarding critical theories. What I think is a point of improvement would be, on the basis of no being as familiar with all of the different theories, would be to give a quick summary as to the main points of the theories. In the book, she talks about the different theories and how they are related to each other, but that is assuming you are familiar with all of their theories and have a deeper understanding of them. If her goal would be for a wider range of people to understand her work, framing the theories before going into deeper analysis of them and making connections would make it easier for someone like me to better understand a lot of her arguments. She does go into the contextualization of Habermas and Foucault at the end of her book, but I feel like the contextualization should occur earlier on in the work. Her points on power would be much clearer with the context.

The book was very thought-provoking especially in the way it exposed me to more of the critical theories. I liked looking at the relationships between power and autonomy and their intersections along with race class and gender. The book included theories I had not been exposed to, so I would say some of the things I read went over my head. What I did understand I thought was interesting. I think this book would be better enjoyed by people who are focused on gender and sexuality, or even philosophy. For someone looking to learn about the different theories, the book would not be as great. Her work on Foucault was definitely interesting, and if you would like to learn about a more in-depth analysis of the repressive hypothesis and how it ties in with power and autonomy this is a good book.